ANSWERS to Stanzas 2 and 3. ALWAYS WINTER

And the earth was
without form and void;
and darkness was
upon the face of the deep;
and the spirit of God
moved on the waters.

This STANZA from LENAPE HHISTORY-GENESIS is evidence that the Americans knew GENESIS.   In fact, the cadence of the verse implies that they chanted GENSIS as they paddled.  Americans may have known GENESIS by heart five CENTURIES before King James had the bible compiled so he could insert passages about the "divine rights of Kings."
__________________

Once again, WHERE did they live?
.

They remembered longingly,
while still in their cold land
the mild weather,
the many deer, and also foxes.
.
Where were they remembering?
.

What does the
triple cross mean?
.
VANG: “The stick with the three cross arms is a representation of the Lenape navigation device, the KIMAL.
.
“Thongs around the head held the slit in wood, stone, or ivory about 3 inches from the eyeball.”
. Myron:  “They were using the principle of similar angles.  The horizon-sky angle seen through the slit, was similar to the angle between the eyeball and marks on the wood, stone, or ivory.
. "By sighting on the sun through a very small hole, they could determine the angle to the horizon.  That angle was the degrees latitude.
. "LENAPE, 1,000 years ago were able to determine the latitude where they were standing, +/- 30 miles.
. The LENAPE paddled into North America by following the Copper Traders route, which was known 3,200 years before the LENAPE were the people using the route.
.

What are the two marks?
.
VANG: “Things change. People forget.
.
“The old Lenape was talking about Milwaukee not Ohio were the sounds were recorded.
. He knew the two blips meant two animals. He wanted the person reciting the self-validating stanza to remember to say "deer and foxes."
. MYRON  The person, who recited the stanza had to remember those two animals to make the stanza self-verifying.
."The word the composer used for deer was “Hart.”  Think of the big stag on the ads for the “Hartford” insurance company.
.
.  Did the 17th century English men, who threw lots of bundles of sticks into the bonfires, know what they were destroying?"
.

…on the flat line?
VANG If you fly into Milwaukee from the west, you travel over miles of flat land. The flat line might indicate flat land.


Do you believe that there was a People of the Sea culture?


I do believe that there was a Sea People Culture.  The shore language is best explained by Sea People.  So is the copper hauling episode that created the Bronze Age.  So is the use of Self-verifying stanzas.


Do you believe that most Americans were in the People of the Sea culture?


.
Do you believe the People of the Sea culture is known as the "Mississippi culture" in Archaeology textbooks?
.
Yes, I believe a North Atlantic Sea People culture lived in America during the time period of the Mississippian culture.  The Sea People did not use European livestock, but preferred to follow the animals, fish, and birds as needed.  That would have been a Sea People's choice.
.
The Sea People's Mosaic is the most important artifact at this time in the LENAPE History.


-- NORSE WORDS---
You should have found this page. 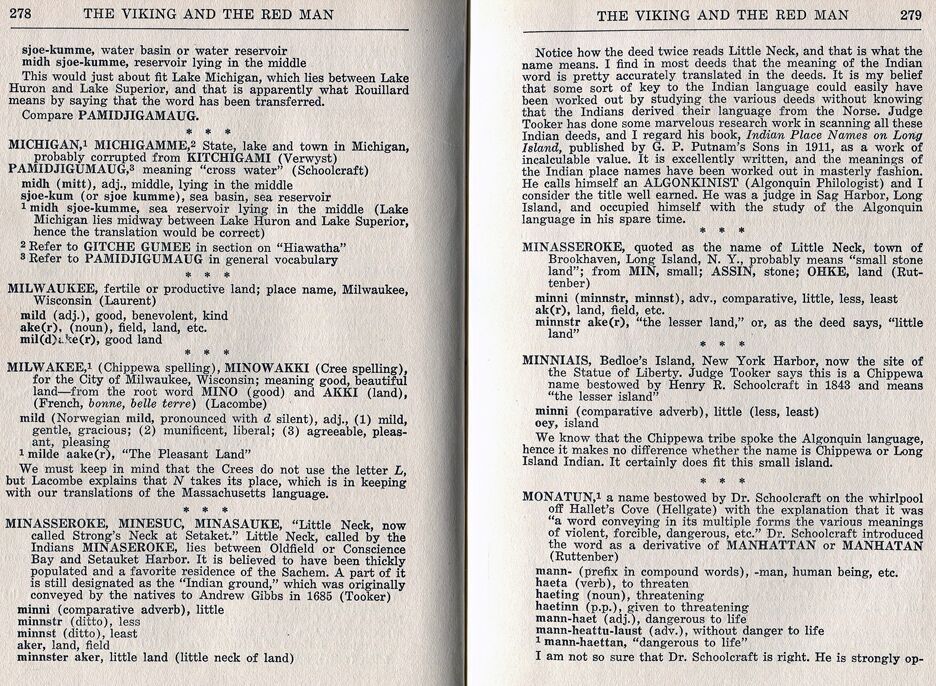 Look at Michigan
and Milwaukee

The mother of my grand kids found this: